Hope in the Middle of Terror 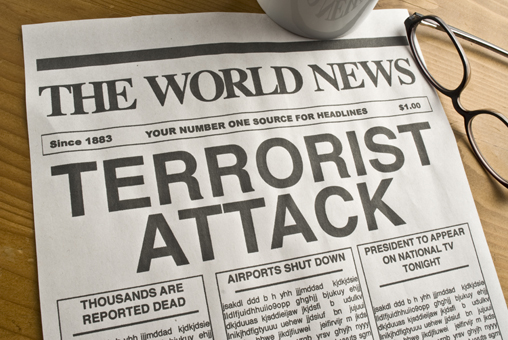 We all hope for someone to stand up and end injustice. When Christians are being bullied and slaughtered by terrorists, we hope for a redemptive response. Scrolling through headlines these past few months, I’ve felt frustrated and powerless while viewing the brutality of Islamic terrorism. Hope has seemed distant and there’s this temptation to fearfully hide and look the other way. As wickedness is broadcasted across vast social media networks and on television it feels like faint voices of reason and protest have be drowned in the overwhelming reality of fear and frustration.

Under the weight of these thoughts, I opened my Bible to read a brief passage in Luke 21:8-27. The passage was not initially encouraging to say the least. In this text, Jesus responds to a disciple’s inquiry regarding the end of the world. He vividly describes to them the political turmoil, moral corruption, and religious oppression that will precede His second advent. I nearly closed my Bible saying, “God, this is not what I needed to read.” Then I stumbled onto verse 28. Jesus gives an insightful directive to those who will endure the last days. He says to them, “when these things begin to happen, then look up and lift up your heads; for your redemption draws near.”

Historically, I’ve read that statement as an escapist. I’ve interpreted it to mean that when things get bad, we should look for the way out. However, I believe Jesus meant something very different. His wisdom gives a hidden and very encouraging insight.

Jesus says that when all these things happen, the church should respond in a specific way. We are to “look up” because “redemption draws nigh.” In the original language that literally translates “straighten up” and “raise your head” because “the time of salvation is approaching.” The time of salvation that Jesus indicates is defined as an “apolytrosis” or the “final salvation event, understood as a grand event for the buying back of God’s people…”

I pulled a church history book from my library and skimmed through the eras of the church’s persecution to find a simple truth. The times in history when corruption was rampant and power was abused correspond to eras in which the church was widely accepted. By contrast, in the darkness of extreme persecution, the light of Christ’s church has burned the brightest. This isn’t a simple feel-good adage. No, it’s the ultimate truth about the church of Jesus. The church explodes in grace, strength, and compassion when it is oppressed.

What is Jesus truly saying in those verses? What should we do in response to the increasing assault? We are commanded to rise up and soberly anticipate the last and most powerful salvation to come. We are called to boldly continue in leading people to Jesus. We cannot afford to be paralyzed by fear. We cannot allow the plague of wickedness to dilute our passion. We cannot fall into the trap of merely wishing for an escape from evil.

You and I, the disciples of Jesus, are the remedy to evil, not the victims of it.

Recently the world has been plagued with growing news of Islamic terrorism. We hear it constantly. Groups like ISIS, Boko Haram, Hezbollah, and Hamas have been radically enforcing the fundamental beliefs of Islam in a violent fashion throughout the Middle East, North Africa, and Southeast Asia. Don’t be deceived into discouragement by the frequent headlines of Islamic terrorism. There is another reality you are not being told. What you are not hearing is that the true disciples of Jesus are responding to the rise in persecution within these Islamic nations. You don’t hear about the thousands of lives that are being saved and brought to the knowledge of Jesus in the face of violent opposition. The reality is just as Jesus predicted. Salvation is sweeping through Muslim nations.

You’ve probably heard comments that regard Islam as the fastest growing religion in the world today; you should know that it is also the most abandoned belief system. There are millions more leaving Islam than entering it. Don’t take my words for it. Hear it from Muslim leaders.

In December of 2012 Al Jazeerah, the Muslim propaganda machine of the Middle East, reported that over 6 million Muslims convert to Christianity each year in North Africa. David Garrison, in his book “A Wind in the House of Islam,” reports that thousands in each of the nine Islamic regions across the world are leaving Islam to follow Jesus. In his book , “Killing Christians,” Tom Doyle writes of numerous accounts in which Jesus appears to Muslims in the most hostile of nations. They are lead to loving Christians and radically changed from terrorists to disciples. For every Christian that is martyred, hundreds of Muslims are impacted with the love of Jesus.

Even as I type this there are missionaries in Mecca who have published ads in the local newspaper stating that if readers have had a dream of a man in a white robe, they should contact them. Entire mosques in Saudi Arabia have come to Jesus and are being used to covertly disciple Muslim background believers. Finally (this is my favorite part), God is literally transforming Muslim nations. Today, Indonesia is the largest Muslim nation in the world. In the middle of this vast empire, over 2 million Muslims leave Islam for Christianity each year. Salvation exploding so powerfully that Muslim leaders have responded by conceiving a campaign named “Save Maryam.” You can Google the video clip and see the videos’ attempt to mitigate the salvation of so many Indonesians. Salvation is coming so rapidly that, at the current rate of conversion, Indonesia will be a Christian nation by 2035.

Jesus’ words ring true. We need to rise up and look boldly in to the face of terrorism with hopeful expectation. Salvation is coming to the nations. We cannot vainly hope that a coming presidential election will turn the tide of rising persecution. We cannot hide in cowardice and look only to our own affairs in hopes of escaping the growing maladies of our time. No, we must stand our ground and continue to pull men and women into the a saving relationship with Jesus.